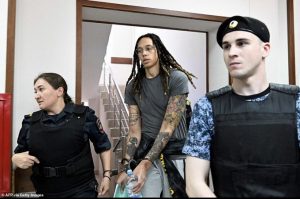 Brittney Griner’s trial is officially set to start on Friday. According to ESPN, Griner has been ordered to remain in custody for the entirety of her trial. Griner was arrested four months ago for alleged cannabis possession.

Griner is facing up to 10 years in prison if she is convicted on the charge of large-scale transportation of drugs. Less than 1% of defendants in Russian criminal cases are acquitted, which can be overturned.

During her court appearance on Monday, Griner’s detention was extended for six months to Dec. 20. Videos and images from the courthouse showed the basketball star in handcuffs.

“It was good to see her in some of those images, but it’s tough. Every time’s a reminder that their teammate, their friend, is wrongfully imprisoned in another country,” Phoenix Mercury coach Vanessa Nygaard said. “It’s tough on our team. It is good to see her. See how she’s doing? I don’t know if she’s doing OK.”

According to ESPN’s T.J. Quinn, Griner’s conviction was always likely, despite the evidence holding up or not, citing the proceedings are a formality to qualify her arrest. Russia is reportedly willing to negotiate her release.

“This may sound counterintuitive, but the trial is a crucial part of the process,” Dr. Danielle Gilbert, assistant professor of military and strategic studies at the United States Air Force Academy, told ESPN. “The Russians have to keep pretending that this is a legitimate arrest. There is no reason to believe that the charges are legitimate or that her trial will be fair. But if and when she’s convicted, the Russians will have made clear their credible alternative to a deal to bring her home.

“Hostage diplomacy cases rely on the pretense of law. With Brittney Griner — and Paul Whelan and Trevor Reed before her — the Russians are using our own respect for the rule of law against us.”