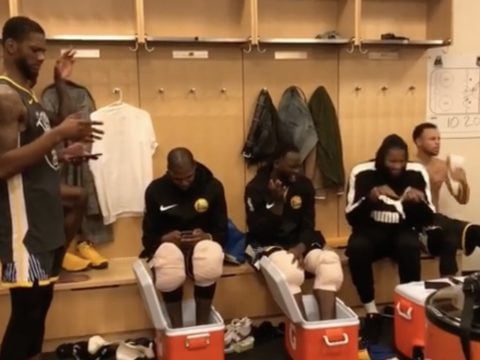 The Golden State Warriors know how to have some fun. The defending NBA champions have social media’s full attention after turning up to pop singer Fergie.

According to reports, the locker room celebration might have something to do with Warriors’ Draymond Green and Fergie’s ex-husband Josh Duhamel.

Duhamel made headlines this week, when he levied some very harsh criticisms at Green. The actor took umbrage to cameras catching Green giggling during the national anthem at the 2018 NBA All-Star Game, which was sung by Duhamel’s ex-wife, Fergie. In a TV interview, Duhamel claimed that a “real man” would have reached out to Fergie to offer an apology for publicly laughing. (Golden State of Mind)