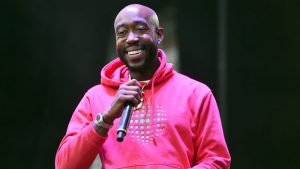 Freddie Gibbs is quite familiar with Karen Civil but has a different experience from her recent accusers.

Over the weekend, Clubhouse and Twitter were filled with reactions to Karen Civil’s accusations. It all began when Joyner Lucas took to Twitter, alleging that the “Marketing Maven” stole $60,000 from.

“After you was paid you went ghost and didn’t expect me to pop. here I am,” tweeted Joyner.

Civil later released a statement, saying that she contacted The Breakfast Club host, Charlamagne The God, in order for the two to have a private conversation. Joyner opted out and later confronted her on the Clubhouse app.

While all of this has transpired over the course of the weekend, Freddie Gibbs stepped in to give his onion of the matter, saying he’s known Karen Civil for years.

In addition, Karen Civil addressed her matters with Hollywood Unlocked founder, Jason Lee as well as comedian Jessie Woo. With Lee’s situation Civil admitted to hiring a hacker to take down Hollywood Unlocked‘s Instagram account. For Jessie Woo, their situation has turned to a legal matter, where Civil has served Woo with a lawsuit.