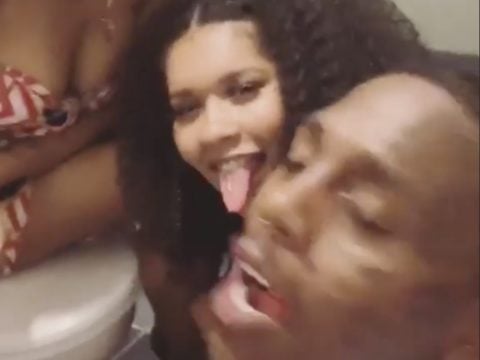 Chicago rapper Famous Dex isn’t letting a little Shocktober concert drama bring him down. The hip-hop newcomer has bounced back from the weekend chaos by living his best life around a few ladies.

Early Monday, Famous Dex hit up Instagram with a shot of himself around a slew of potential baes.

This past Saturday morning, Dex made headlines for allegedly pulling out a gun on Shocktober concertgoers following his performance.

Video posted to social media shows the rapper telling fans to get away from his car. After some refused to back off, we see Dex lean out of his seat wielding what appears to be a gun. After Dex and his entourage fled the scene, campus police issued the following alert: “a male 25 yr, 5’11, was seen inside white vehicle…with a gun at Pereira & W. Peltason. Call 911 if vehicle seen.” Shortly after the incident, UC-Irvine police posted a tweet, stating the “campus [was] all clear.” (Complex)

@FamousDex fr pulled a gun out at uci students on campus for surrounding his car pic.twitter.com/SrkGffjzCS

After his set, Dex made sure to hit up his Instagram page with some Shocktober shots.

According to reports, Famous Dex turned up his set so much it forced the Friday concert to end early.

ASUCI’s annual concert event Shocktoberfest was cancelled following a security and safety hazard which was prompted by midliner Famous Dex, walking into the audience area. Video footage of the incident shows students rushing the floor after the rapper stepped down from the stage, causing a stampede. According to witnesses, the rush of students caused barricades to be knocked over. Soon after students rushed the floor, the Bren Events Center switched the lights on and began directing students to “please exit the Bren Events Center, the show is over.” (New University)