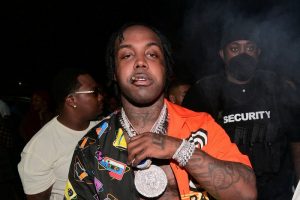 Lousiville rapper EST Gee may have to look in a different direction for management as his current manager, Eric Mosley, has been arrested by the FBI.

Reports claim that a search in Mosley hotel room led to authorities finding a “kilogram of cocaine, $100,000 cash, an AK-47-style pistol, and a stolen handgun.” If convicted of the crimes, Mosley looks at a minimum of 10 years and a maximum life sentence.

Authorities recently discovered that in August of 2020, Mosley was one of the individuals behind a $300,000 cash bond for the person accused of killing Trinity Randolph, 3, and her father, Brandon Waddles.

24-year-old Kevin Lawless is now facing the death penalty for the murder of Randolph and Waddles. Shortly after Lawless was release by bond, many were outraged after seeing videos of Lawless boasting about getting out. Police tracked that the money to buy Lawless’ bail came from Mosley and Est Gee’s company, Everbody Shine Together LLC, the acronym behind the Louisville rapper’s name.