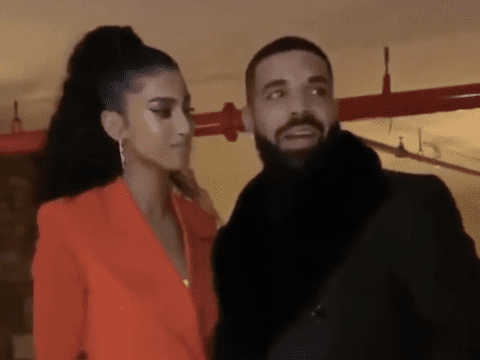 OVO Sound boss Drake can’t catch a break anymore. The 6 God is currently getting attached to 23-year-old Dutch model Imaan Hammam after cameras spotted him on multiple occasions around the jaw-dropping beauty.

Big Facts: Over the past few hours, footage and pics have emerged of the possible overnight couple looking boo’d up together at a New York Fashion Week event.

Photos show the Toronto MC, 33, exiting the 23-year-old model’s New York City apartment with two bags shortly after she left the complex herself on Wednesday afternoon. Come Friday night, the “Life is Good” rapper and the runway diva together attended her NYFW event celebrating her new collaboration with luxury lifestyle brand Frame. Drake was seen gripping her waist several times while press and attendees snapped photos and recorded the evening. (Page Six)

Before You Go: Some reports believe people spotted Drake and Imaan kissing at another event.

After checking out the Nike fashion show together the night before, they were reportedly spotted kissing at the Fleur Room in the early hours before heading back to Hammam’s apartment. (Daily Mail)