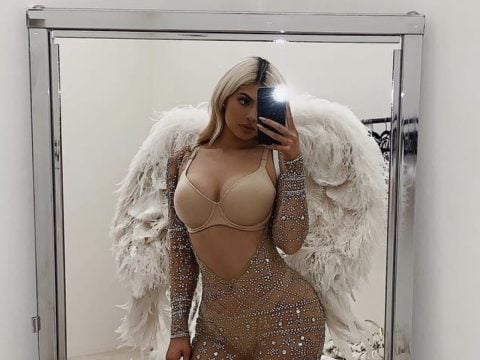 Reality TV star Kylie Jenner is really riding for her man. The hip-hop girlfriend has put together a line of lipstick kits to celebrate Travis Scott‘s new Astroworld Tour.

According to reports, concertgoers will be able to grab three liquid lipsticks from concession areas at different tour stops.

Kylie Jenner will have up Astroworld Lipkits on tour pic.twitter.com/VAtitT0p61

I put my blood sweat & tears in writing a dope album only for Travis Scott to have Kylie Jenner post a tour pass telling ppl to come see her & Stormi. lol. Im actually laughing. #Queen broke the record of being number 1 in 86 countries. Thank Jesus & thank you to my fans.

Travis sold over 50K of these. With no requirement of redeeming the album! With no dates for a tour, etc. I spoke to him. He knows he doesn’t have the #1 album this week. I love my fans for the #1 album in AMERICA! I’ll explain on #QueenRadio 4 albums in, #1 in 86 countries

I looked at the numbers the Carters, Kanye, Nas, etc recently did. Travis sold 200K in his first week of clothes alone. I spoke to him last night & he said he’s been selling clothes b4 the music. Billboard says they’ll change the rules cuz of this, so it should be changed now!

In September, Nicki explained her frustrations toward Travis Scott over an album sales dispute.

“The ‘C**k Sucka of the day is Irving Azoff. And I’m gonna tell you why – allegedly, he tried to put out a smear campaign against my tour, and contacted people in the media to spread negative things about my tour.” (Queen Radio)