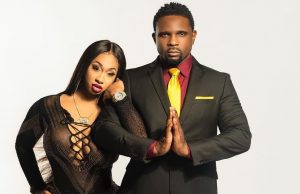 The Internet buzzed on Monday with rumors of a romance between Darius McCrary and Sidney Starr. McCrary is most known for his role as Eddie Winslow on Family Matters, Starr, is a transgender reality star. The two shared images from a photoshoot, which sparked questions online about their romantic status.

Sharing one of the photos, Starr would state they are “great friends.”

“Here standing next to me is a seasoned legend Actor in this entertainment industry. @dariusmccrary,” Starr wrote. “A black heterosexual male actor who’s standing aside a controversial transgender woman like myself.. We are great friends … and this is a powerful movement we have made to let this be a lesson to the WORLD that we are all human ! No matter what !!!!”

In a second post, the two’s on-camera chemistry radiates, but McCrary states they are just good friends.

“While y’all are discussing these rumors that aren’t true, we eating,” he said, while enjoying a meal with Jo Marie Payton who played Harriet Winslow. “What are we, in high school? You’re going to tell me who I can’t be friends with, who I can’t hang out with?”

He would go on to add, “I think my fiancé would really have something different to say. That’s what y’all should be focusing on, where that ring is.”

The post Darius McCrary Addresses People Who Are Critical of His Friendship with Sidney Starr appeared first on The Source.