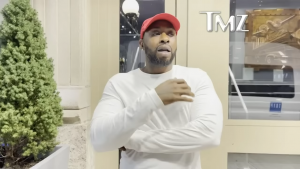 Last week, Ceasar Emanuel was axed from VH1 after a video from a ring camera showed him abusing a dog with a chair and tossing the dog’s cage around a backyard. Emanuel would speak with TMZ, stating the video is a setup and he was trying to break up a fight between two dogs. Ceasar owns the Black Ink Tattoo shop in New York City, in addition to shops in Atlanta, Orlando, and Houston.

“I know the footage that everybody seen – it looks crazy,” Ceasar said. “Even me looking at it, it looks crazy. But it’s a moment in time I wish I could take back. I came home, my dogs is attacking each other.”

He added, “I separated the dogs. Now, one of the dogs attacked me. What I did was open the garage door, try to deescalate it. But I was nervous. I’m not gonna tell you no lie. I was nervous and I was scared. So, at the end of the day, I was trying to back the dog down. I was honestly trying to scare him. At not one time was I trying to abuse this dog. All I was trying to do was get him back in his cage.”

Ceasar stated the footage from his Ring camera is a setup.

“I don’t know how the footage got leaked,” Emanuel said. “I know that was off my Ring camera, I’ma keep it a buck with you. I feel like I’m being set up in some way because the way I’m being portrayed, that’s not my character.”

Later in the interview, Ceasar stated he has received death threats online.

TMZ notes Ceasar is being investigated by animal services and law enforcement. A representative for Fulton County Animal Services stated they have been working with South Fulton PD to investigate what occurred at Ceasar’s home. There reportedly is still time to charge him for the incident.

Last week, in response to the video leak, VH1 decided to no longer work with the New York native.

A statement from VH1 was released on social media Thursday afternoon:

We have made the decision to cut ties with Ceaser Emanuel from Black Ink Crew New York. Since next season was close to finishing production, this decision will not impact the upcoming season.

Speaking with TMZ, Ceasar’s attorney, Walter Mosley, pointed out the video is old. “There is no police involvement,” Mosley said. “It was shot at his residence in Atlanta during COVID.”

“If you can treat a dog like this, it shows how sick of a person you truly are,” she wrote. “I don’t even get into the life of this man, but this video made me so upset. Anyone who knows me, knows I LOVE animals. Especially dogs.”

She added, “Even after he beat his daughter up, @vh1 @viacom_intl & the new @blackinkcrew producers tried to protect Ceaser, even made up fake conflicting storylines about my relationship to do it! Now this, cannot be undone. I pray the people see you, @ceaserblackink , as the monster you are. Your karma has been adding up for years, but to do this to two innocent dogs!?! This is crazy. CHARGES NEED TO BE PRESSED, and CANCELLATIONS NEED TO BE MADE!”

The post Ceasar Emanuel Says He Was Set Up and Was Stopping a Dog Fight in Viral Video appeared first on The Source.