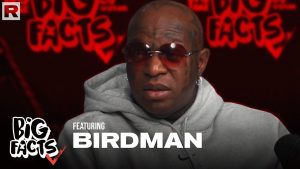 For years, the narrative around Birdman and Cash Money Records was if you were an artist there you would never see the money. Those rumors included the biggest Cash Money star of all time in Lil Wayne who engaged in a dispute with Stunna over money.

During an appearance on the Big Facts podcast, Birdman would address all claims of pulling a bag from artists.

“I ain’t never took from no nigga,” Birdman said. “I always bless niggas. I had some incidents early on because I was really young in this shit. I ain’t know no better. Any problem I had I cleared it up. I paid my nigga. Remember because I was young. I’m telling you 20 years old. So, a lot of shit happened early on, I just ain’t know. And I’m with these white folks and they not attending to the business.”

If you need any evidence of everything being good between Lil Wayne and Birdman, they recently teamed with Roddy Ricch for the new single “STUNNAMAN.”

You can hear Birdman speak on it around the 18-minute mark below.

The post Birdman on Taking Money From Rappers: “Any Problem I Had I Cleared It Up” appeared first on The Source.