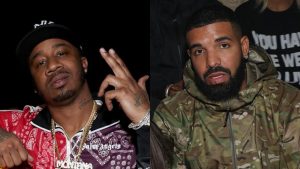 “Sent @Drake a record and I kno imma wanna drop it soon as he send it back,” Benny wrote back in Feb of 2020. Benny even gave fans a sneak peek of Drake’s verse before stopping the audio and saying, “you can’t play everything.”

Fans expected to be surprised with the collab on Drake’s sixth studio album, Certified Lover Boy, but unfortunately are still left with questions about the collab single. In a sit down with Wayno, Benny was asked about his absence from the highly anticipated album. “Drake is Drake. He’s the biggest artist in the world so ain’t no tellin’ where that song gon’ land,” he began.

“We got the song, I played it for all the homies. It’s a vibe and he gotta place that where he sees fit to it. I feel like it definitely would have fit in and definitely would have mixed things up, but I also see why he didn’t put it on there. He just gotta trust himself and trust his team and what he’s doing.”

Do you think the rappers will eventually drop the song or will the song fade away in the archives? Check out the video below.

The post Benny The Butcher Reveals Why He Didn’t Appear on Certified Lover Boy appeared first on The Source.