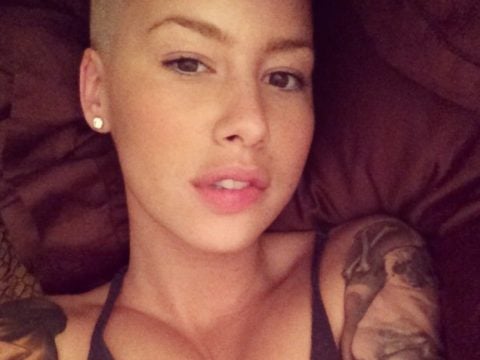 According to reports, Muva Rose and rapper Tyga‘s best friend are low-key coupled up.

Sources tell us Amber is dating Def Jam Records’ Vice President of A&R Alexander ‘AE’ Edwards, who we’re told she’s been seeing for a few weeks now … but she’s known him since Tyga and Blac Chyna were together few years back. We’re told Tyga and BC both approve of their respective friends banging — but hold your breath for a double date. It’d take more than this for Chyna and Tyga to reunite. (TMZ)

Over the summer, Amber shared a gooey pic of her recent Denver Nuggets boyfriend Monté Morris and captioned it “Mine.”

Just in case there was any doubt…

The same week, Amber talked about her close-knit bond with Monté.

“No, it’s very true,” Rose responded when asked if her new relationship with boyfriend Monté Morris is as lovey dovey as it appears. “Monte is very normal. I’m very normal. He’s from Flint, Michigan. He’s an amazing guy, comes from a good family. He loves his mama, he loves my son. He loves me, he’s like my best friend. We just have fun together and that’s what I felt like I always needed, but I felt like I had to go through what I had to go through in order to accept that healthy love into my life.” (“Open Late W/ Peter Rosenberg”)

Recently, Amber shared a pic of herself and MM together at a Colorado Rockies ball game.

There is no separating this summer love!