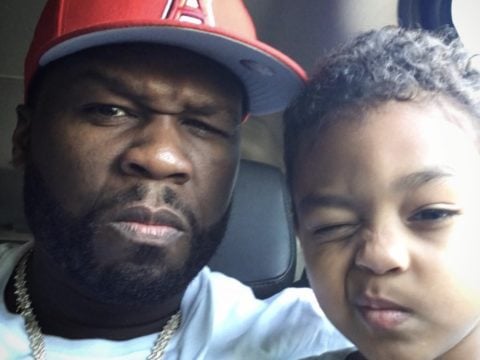 New York rapper 50 Cent might have to delete an Instagram post with the quickness. The hip-hop veteran has made himself liable to catching backlashing for referring to his pal Tekashi 6ix9ine as “retarded.”

Fif went to IG Thursday (November 1) with the less than flattering term and compared 6ix9ine to his real-life son Sire Jackson.

On Thursday, reality TV star Kim Kardashian issued an apology for referring to friends as “retarded” in an Instagram Story video.

Kim has apologized for using the word, telling us, “I want to apologize for what I said in a recent video post that is inappropriate and insensitive to the special needs community. I try to learn from my mistakes and this is one of those times. Please know that my intention is always pure, and in this case, it was a mistake. I’m sorry.” (TMZ)

In the Instagram Story clip, Kardashian refers to people as “retarded” for not realizing she dressed up as veteran supermodel Pamela Anderson for Halloween.

While in conversation with her former assistant and current confidant Stephanie Shepherd, Kardashian tells her, “Nobody knows who I am. Yeah! Retarded.” Kardashian also expressed, in another video clip, directly to her followers that it was “so sad” that “nobody knew who we were” because they were “too f-cking young” to register the reference. (Pamela Anderson and Tommy Lee originally wore these outfits to the 1999 Video Music Awards.) (W Magazine)

According to reports, the festivities went down Thursday at her sister Kendall Jenner‘s crib.

The Keeping Up With the Kardashians star attended her sister Kendall Jenner’s spooktacular bash on Wednesday with BFF Jonathan Cheban. The besties dressed up as Pamela Anderson and Tommy Lee; however, guests had a hard time identifying the duo. (E! Online)